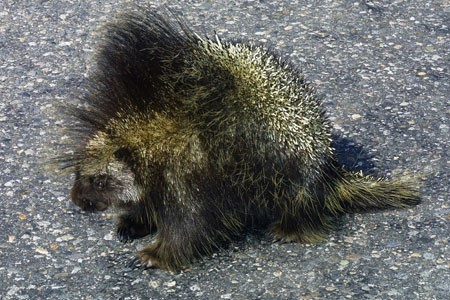 The porcupine is the second largest rodents found on the continent after beavers, rodents are related to mice and rats.  An adult porcupine is about 20 inches long, not counting the tail and can weigh from 10 to 28 pounds.  Long black and brown guard hairs and quills cover its body.  The sharp stiff quills are actually modified hairs.   Porcupines are famed for their unique defense - they carry about 30,000 quills on their backs.

Porcupines live throughout most of the western United States and parts of the Northeast. They are also found in forests in Canada.

Porcupine habitat ranges from sea level to treeline, in the forested areas. In the unforested areas, they are found along riparian corridors with trees or large shrub growth, including lush sagebrush. It needs trees or shrubs large enough to provide bark and cambium for winter feeding.

Porcupines are herbivorous animals (eat only plants). They like munching on a variety of trees including fir, hemlock, and pine, as well as maple, beech, birch, oak, elm, cherry and willow.  They also eat several kinds of woody shrubs.
When not in trees, porcupines prefer the protection of a den.  The dens can be found in rock crevices, caves, hollow logs, or under houses and barns.  They can live solitary life (left on their own) or in the small groups of up to 6 members and can live up to 15 to 18 years.

Porcupines are nocturnal, which means they are active primarily at night.  Porcupines like to sit quietly in trees, so if you spot one, you should be able to get a good look at the animal. When porcupines are on the ground, they shuffle and waddle along. The long sharp quills provide protection from predators.

The quills of the North American porcupine have a topical antibiotic on them, so even though getting stuck is painful, it won't cause infection. Researchers studied the structures of porcupine quills to understand how they effortlessly enter flesh but do not leave as smoothly. Tiny backward-facing barbs studding the tip of each quill were found to reduce penetration force and maximize staying power.

During mating season, female initiates close contact with male.  A porcupine pair usually raise only 1 to 2 babies each year, and both parents take care of the young.  Babies are called porcupettes and they are born with soft quills. Soft quills will harden in the next few hours.  Females reach reproductive age at about  2 years, while a male must be about 2 ½ years to reach reproductive maturity.  The extremely low reproductive rate in porcupines may be a contributing factor in their population decline.
Tribal Wildlife Biologists have witnessed a decline in porcupine numbers in recent years and ask for public volunteers to assist in reporting sightings of porcupines in the field.  When reporting a porcupine sighting be sure to include the location of sighting, with GPS coordinates, habitat and a photograph of the porcupine.

For more information about porcupines contact Kari Eneas, Tribal Wildlife Management Program by email at This email address is being protected from spambots. You need JavaScript enabled to view it. or by phone at 675-2700 ext. 7278 or ext. 7217.

Please view the flyer below for information. 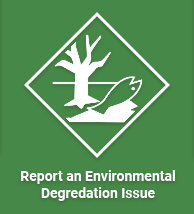